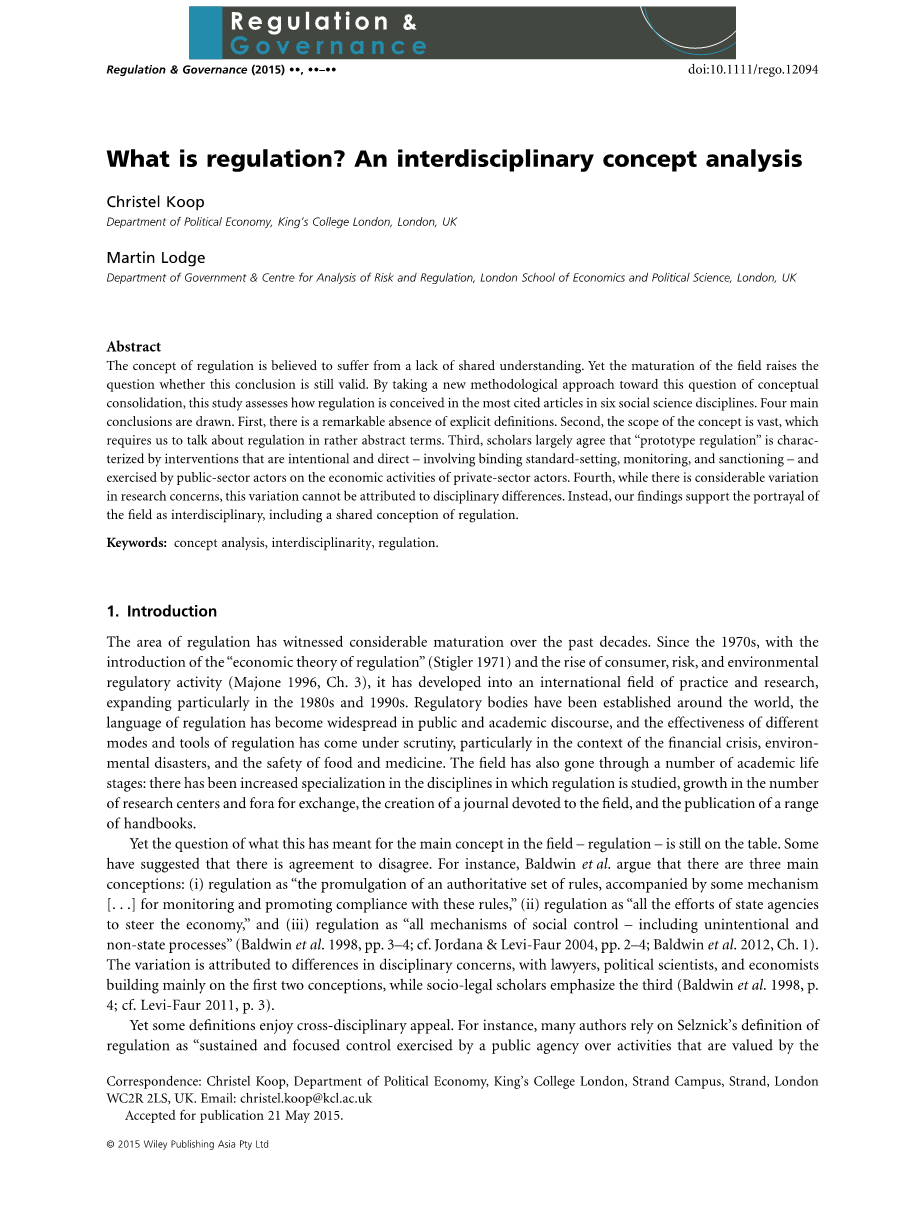 Nature of the regulator 5

Separation of regulator and regulatee 7

What is regulation?An interdisciplinary concept analysis

The area of regulation has witnessed considerable maturation over the past decades. Since the 1970s, with the introduction of the “economic theory of regulation” and the rise of consumer, risk, and environmental regulatory activity, it has developed into an international fifield of practice and research, expanding particularly in the 1980s and 1990s. Regulatory bodies have been established around the world, the language of regulation has become widespread in public and academic discourse, and the effectiveness of different modes and tools of regulation has come under scrutiny, particularly in the context of the financial crisis, environmental disasters, and the safety of food and medicine. The field has also gone through a number of academic life stages: there has been increased specialization in the disciplines in which regulation is studied, growth in the number of research centers and fora for exchange, the creation of a journal devoted to the fifield, and the publication of a range of handbooks.

Yet the question of what this has meant for the main concept in the field – regulation – is still on the table. Some have suggested that there is agreement to disagree. For instance, Baldwin et al. argue that there are three main conceptions: (i) regulation as “the promulgation of an authoritative set of rules, accompanied by some mechanism for monitoring and promoting compliance with these rules,” (ii) regulation as “all the efforts of state agencies to steer the economy,” and (iii) regulation as “all mechanisms of social control – including unintentional and non-state processes”. The variation is attributed to differences in disciplinary concerns, with lawyers, political scientists, and economists building mainly on the fifirst two conceptions, while socio-legal scholars emphasize the third .

Yet some defifinitions enjoy cross-disciplinary appeal. For instance, many authors rely on Selznickrsquo;s defifinition of regulation as “sustained and focused control exercised by a public agency over activities that are valued by the community”. Equally prominent is Blackrsquo;s more detailed defifinition of regulation as “the sustained and focused attempt to alter the behaviour of others according to defifined standards and purposes with the intention of producing a broadly identifified outcome or outcomes, which may involve mechanisms of standardsetting, information-gathering and behaviour modifification” .

Our study addresses the question whether we can identify any agreement on the defifinition of regulation across different social science disciplines. Do we still find disciplinary preoccupations or does scholarship point to a state of cross-disciplinary conceptual consolidation? Our main findings suggest that there are shared conceptions of regulation across disciplines,with research interests that are not discipline-specifific driving the variation in conceptions.

As noted, scholars have stated that the diversity of properties that are associated with regulation make it impossible to come to a single defifinition of the concept we refer to as regulation. As Baldwin et al. put it, there are “a variety of defifinitions in usage which are not reducible to some Platonic essence or single concept” .In addition, Black points out that the defifinition used often strongly depends on the problem that the author is interested in . As a consequence, Levi-Faur argues,“we should recognize the many meanings of regulation and devote our attention to understanding each othersrsquo; terms” .

Nonetheless, two main observations can be made. First, at an abstract level, authors agree that regulation is about intervention in the behavior or activities of individual and/or corporate actors. As Mitnick puts it, “the central element of the class of behaviors that might be termed lsquo;regulationrsquo; is an interference of some sort in the activity subject to regulation – it is to be governed, altered, controlled, guided, regulated in some way” . Similarly, Moran indicates, “its core meaning is mechanical and immediately invokes the act of steering” . Mitnick adds that this implies that regulated activities are not to be replaced or banned; they are only to be regulated. This is reflflected in Selznickrsquo;s defifinition, which refers to “activities that are valued by a community” and, thus, excludes most areas of criminal law enforcement. In Mitnickrsquo;s view, “there should be public recogniti