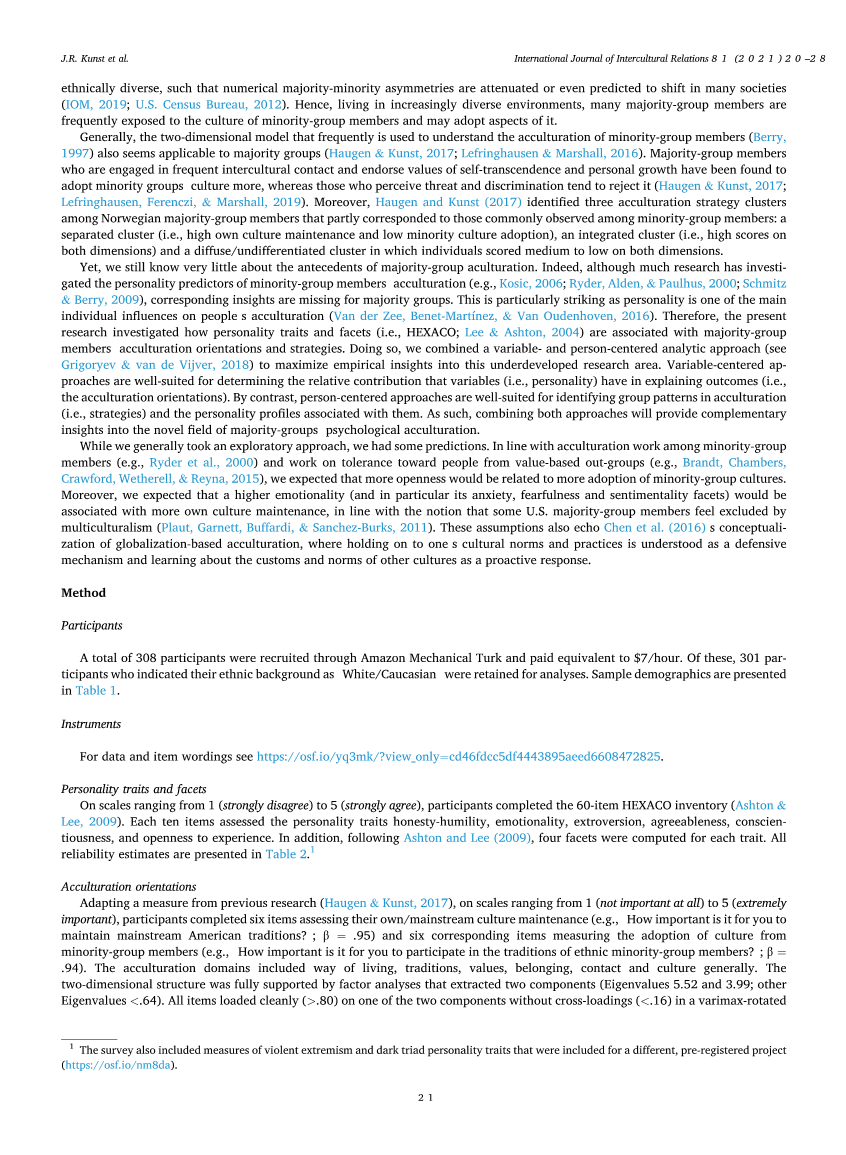 Who adopts the culture of ethnic minority groups? A personality perspective on majority-group membersrsquo; acculturation（节选）

Acculturation is commonly conceptualized as a two-way process in which all groups involved in intercultural contact change. Yet, very little is known about the acculturation orientations of majority-group members and the factors that differentiate those who adopt aspects of minority groupsrsquo; culture from those who reject them. In the present research, we for the first time aimed to answer this question from a personality perspective. A total of 301 White majority-group members living in the U.S. first completed a personality assessment and then indicated the extent to which they maintained their own culture and adopted the culture of ethnic minority groups. Our analytic approach combined top-down variable-centered and bottom-up person-centered analyses. In terms of variable-centered analyses, participants who adopted the culture of minority groups scored lower on conscientiousness and higher on openness. Moreover, adoption of minority-group cultures was positively associated with the personality facets sociability and inquisitiveness, and negatively with modesty and prudence. In terms of person-centered analyses, four acculturation clusters emerged, resembling strategies commonly observed among minority groups: marginalization, separation, integration and a diffuse strategy in which participants scored around the midpoint on own culture maintenance as well as minority culture adoption. Interestingly, especially this diffuse cluster differed from the other clusters on personality traits and facets, with participants tending to be more open than integrated and separated individuals, and less conscientious than separated individuals. The present report suggests that personality traits may help explain how majority-group members acculturate and highlights avenues for future research.

Although acculturation is defined as a two-way process in which all groups involved in contact change (Berry, 2008), most research has focused on cultural change among immigrants and ethnic minority groups. Such research has focused on majority-group membersrsquo; acculturation expectations or prejudice and discrimination (Bourhis, Moiuml;se, Perreault, amp; Senecal, 1997; Horenczyk, Jasinskaja-Lahti, Sam, amp; Vedder, 2013; Kunst, Thomsen, amp; Dovidio, 2019; Piontkowski, Rohmann, amp; Florack, 2002), rather than how majority-group members acculturate themselves. This lack of research is particularly striking, given that societies around the world are becoming more ethnically diverse, such that numerical majority-minority asymmetries are attenuated or even predicted to shift in many societies (IOM, 2019; U.S. Census Bureau, 2012). Hence, living in increasingly diverse environments, many majority-group members are frequently exposed to the culture of minority-group members and may adopt aspects of it.

Generally, the two-dimensional model that frequently is used to understand the acculturation of minority-group members (Berry, 1997) also seems applicable to majority groups (Haugen amp; Kunst, 2017; Lefringhausen amp; Marshall, 2016). Majority-group members who are engaged in frequent intercultural contact and endorse values of self-transcendence and personal growth have been found to adopt minority groupsrsquo; culture more, whereas those who perceive threat and discrimination tend to reject it (Haugen amp; Kunst, 2017; Lefringhausen, Ferenczi, amp; Marshall, 2019). Moreover, Haugen and Kunst (2017) identified three acculturation strategy clusters among Norwegian majority-group members that partly corresponded to those commonly observed among minority-group members: a separated cluster (i.e., high own culture maintenance and low minority culture adoption), an integrated cluster (i.e., high scores on both dimensions) and a diffuse/undifferentiated cluster in which individuals scored medium to low on both dimensions.