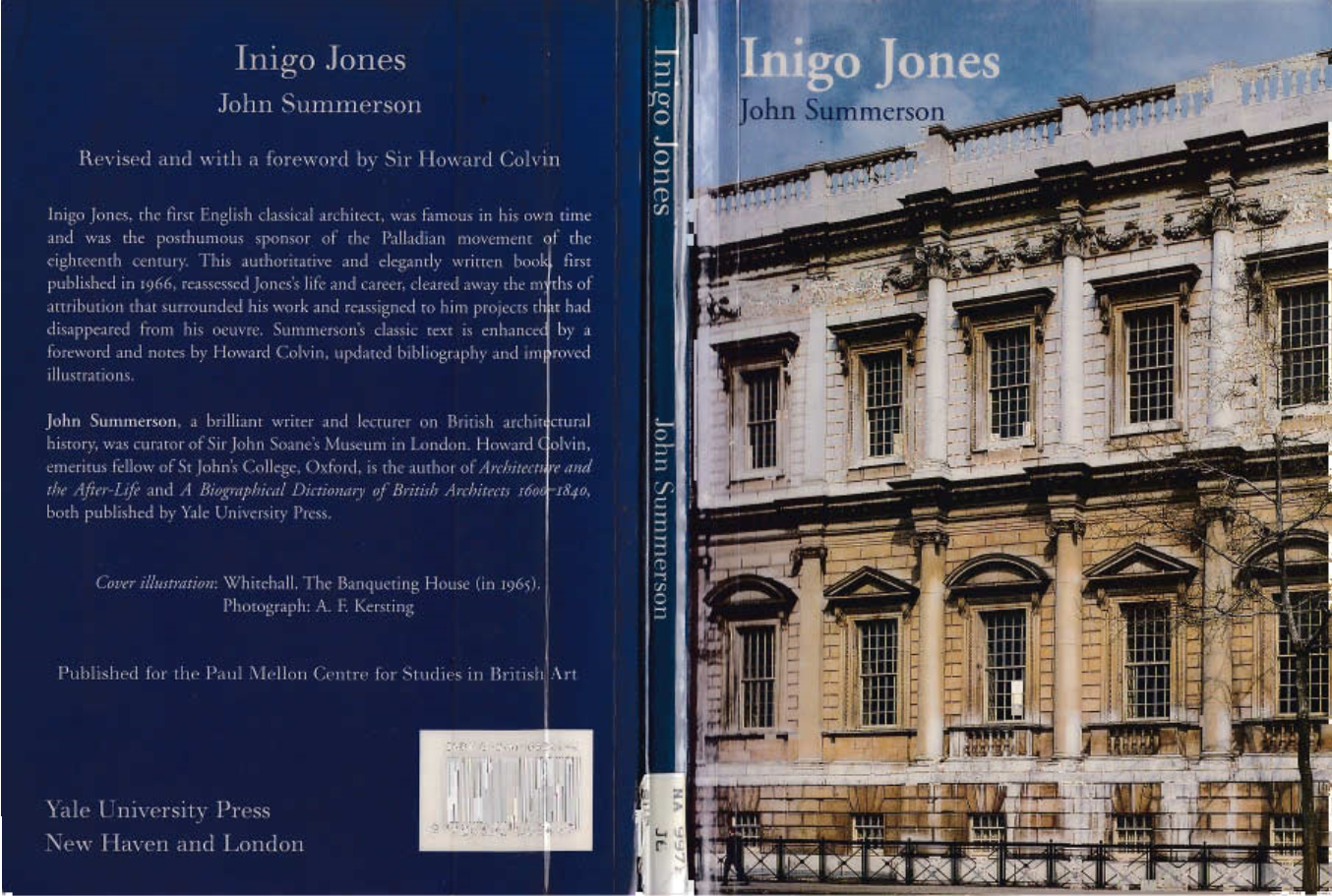 lnigo Joness responsibilities to the Crown, whether as the Kings personal adviser or as head of his Works, were manifold and unremitting. He was rarely able and perhaps did not care to design buildings for private persons. Nevertheless there were those who could attract his professional attention either because of their own exalted station at court or on the score of personal friendship. There is evidence of this among the drawings. There is, for instance, a most interesting elevation sketched by Webb but marked by him lsquo;Mr Surveyorrsquo;s desygersquo;, for a town house in Blackfriars for Sir Peter Killigrew (49).

Killigrew had been of service to Charles I in the Spanish marriage adventure. Charles knighted and pensioned him soon after his accession, so the date of the design is likely to be in the late twenties.It was, for London, a big house with a five-window front to the street. It was also, for London, an innovating house. The ground floor was simply a compact version of a traditional English type; but it was low, and the main rooms - including dining-room, withdrawing-room and two fine bedrooms - were all on the much loftier first floor. In shore, it was a small Italian palazzo, with a piano nobile. The facade - more like an Italian palace than anything in London before Barrys Reform Club of 1836 - was very much that of the Princes Lodging at Newmarket with the centrepiece left out. Once again we are reminded of the consistency of Joness work - of the small number of elements which he chose to combine and recombine.

In 1638 Jones designed a building for Lord Maltravers, to be built in Lothbury. Maltravers was the thirty-year-old son of Joness great patron and friend, Lord Arundel, and he had obtained from the King a patent to coin royal farthing tokens. For the change and issue of these tokens he established an office on the family property in Lothbury and of the two designs which we have for it, one, with a six-column portico, has a decidedly official character. The other, more modest (50), 50. Design for Lord Maltravers, Lothbury, London, 1638

is closely related to the Covent Garden houses, though of course without the arcades. But what makes this modest elevation of very special interest is its connection with a design for a terrace of four large houses, fenestrated exactly as the house but with an additional storey (51).

Most probably this represents a scheme for developing the Arundel land in Lothbury and it is the first instance we have (Covent Garden apart) of a row of London houses designed in a regular classical manner.

This question of regularity in London street architecture much concerned Jones. He had initiated it at Covent Garden and there cannot be much doubt that the uniformity of, at least, the west side of Lincolns Inn Fields was due to rhe exercise of his authority. As built from 1638 onwards, it consisted of more or less identical houses with three rather taller houses somewhere a little north of the middle. This was not a very artistic arrangement but the whole thing was a commercial speculation on a considerably less respectable level than Covent Garden. Of the three taller houses the centre one was the tallest and most ornamented. It still exists (as Nos 59 and 60 Lincolns Inn Fields) and is called Lindsey House (52).

We cannot be absolutely sure that it is by Jones,* but behind its rather coarse execution is a scheme which fits exactly into the pattern of his ideas. Here again is the piano nobile over a low ground floor, but this time the ground floor is made the rusticated podium of an Ionic order rising through two storeys to the entablature. The first-floor windows are pedimented and the centre window has a Mannerist variation recalling the gateway to Arundel House. Lindsey House has been much altered, the lowering of most of the window-sills ruining its proportions, but the print in Vitruvius Britannicus shows it as designed, or nearly so. It has a forecourt with rwo massive rubbed brick piers capped by stone vases, recalling the stone piers of the River Stairs at Somerset House; these, however, must belong near the end of the century.

It was here, at Lincolns Inn Fields and in near-by Great Queen Street, that Joness influence penetrated the London vernacular. Lindsey House is recognizably proto-Georgian, the conscious model for some and the unacknowledged dictator of whole streets of houses in innumerable cities of the English-speaking world.

Country houses by Inigo Jones are and aJways were extremely rare - so rare, in fact, that not a single house can be named as being or having been indisputably his personal work. Even Wilton, whose celebrity depends so largely on its association with Jones, has recently been shown to have been built from designs by Isaac de Caux, employed on Joness recommendation and receiving in its execution his advice and approbation. One glance at the famous south front of Wilton (53),

built for the Early of Pembroke about 1636-40, shows how closely its ratios and details are influenced by earlier Jonesian works; while the central window with its carved figures is the Scamozzi theme which he had used in the Queens Chapel, St Jamess, and was to use again in his Whitehall designs. The presence of a double-cube chamber behind this great window is almost predictable; the only surprise is that it lies not back from the window but across the axis, the window penetrating the middle of one of the rooms long sides. lt is a room of great splendour (54)

of exactly the dimensions of the Somerset House chapel. It is not, however, the room belonging to