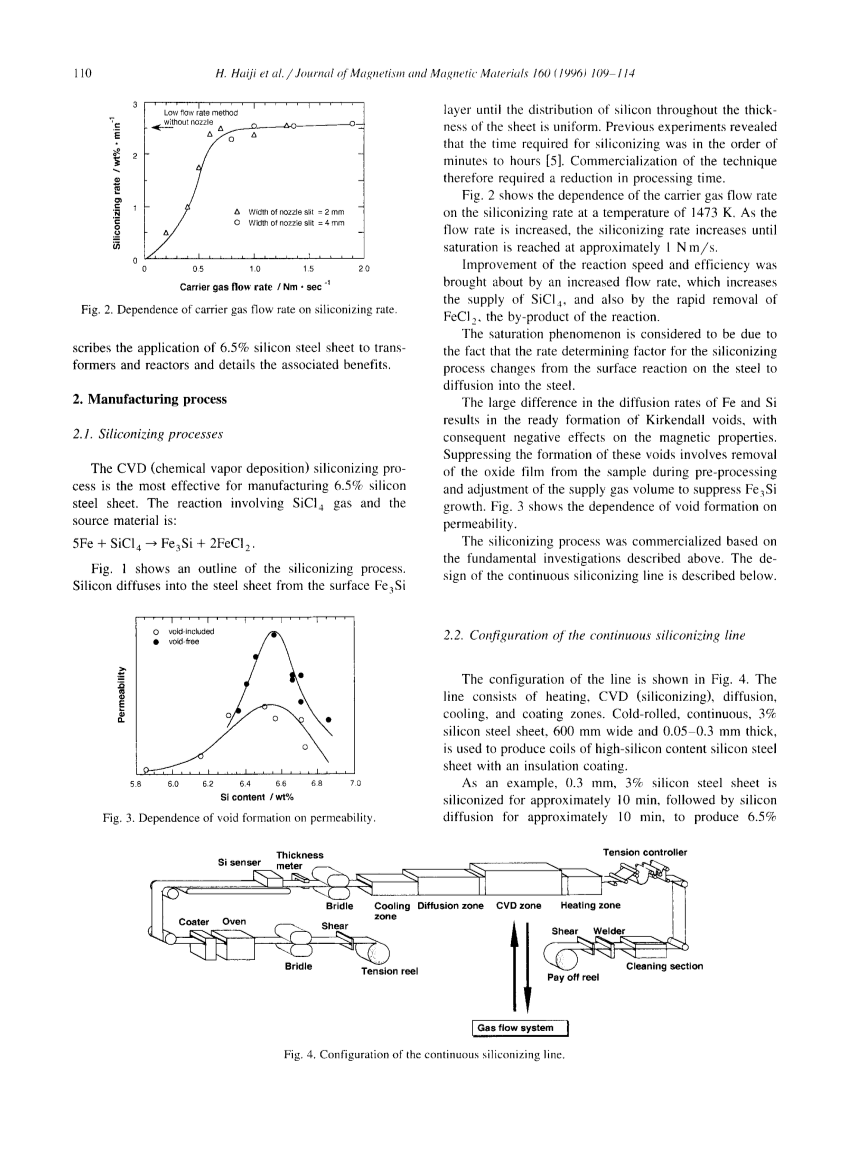 NK K led the world in the construction of a continuous production line for manufacturing 6.5% silicon steel sheet in coil form using a CVD siliconizing process. The product is a non-oriented, 6.5% silicon steel sheet with an iron loss of W l / 1 0 k = 9.25 W / k g (0.1 mm thick) and excellent soft magnetic properties. The workability of this product was improved by preventing oxidation of the source materials during manufacture. NKK recently succeeded in manufacturing 0.05 mm thick 6.5% silicon steel sheet in coil form. Cut cores from this material have a very low iron loss at high frequencies that is superior to that obtainable with 0.025 mm Fe-based amorphous materials.

it is widely known that the soft magnetic properties of silicon steel sheet are improved by increasing the silicon content. At approximately 6.5%, the magnetic permeability increases to a maximum, iron loss decreases to a mini-mum, and magnetostriction falls to zero. However, when the silicon content exceeds 4%, the workability is dramati-cally reduced, making it extremely difficult to produce thin, 6.5% silicon steel sheet by the hot - cold rolling process, as is possible with normal electrical steel sheet. A variety of experiments have been conducted over the years using rolling, rapid quenching, and siliconizing methods in an attempt to produce thin, 6.5% silicon steel sheet [1-3].

At NKK, we concentrated on the CVD (chemical vapor deposition) siliconizing method to manufacture 6.5c2~ sili-con steel sheet on a commercial scale and examined the conditions required to speed up the siliconizing process and to suppress development of Kirkendall voids [4]. This work, along with other efforts at solving equipment-related problems, culminated in July 1993 with the completion of a continuous CVD siliconizing line capable of a monthly production of 100 tons. This line has produced 0 . 1 - 0 . 3 mm thick, 6.5% silicon steel sheet since startup. The product has been widely used as a high frequency core material for an assortment of applications because of its low noise and low iron losses at high frequencies.

The advancement of semiconductor devices has spurred a drive towards higher operating frequencies for electrical power supplies. This in turn has led to further demands for even lower iron losses for the materials used at these higher frequencies.

To meet these recent demands, 0.05 mm thick, 6.5% silicon steel sheet was manufactured to further reduce iron losses at high frequencies by making the silicon sheet thinner. The magnetic properties were then examined.

At the same time, it was confirmed that the workability of this product is significantly improved through optimiza-tion of the manufacturing conditions. As a result, slitting and stamping at room temperature is now possible and the efficiency of operations has been dramatically improved.

Section 2 of this paper describes the siliconizing pro-cess and the configuration of the production line, Section 3 presents the magnetic properties of the product, and Sec-tion 4 discusses its improved workability. Section 5 describes the application of 6.5% silicon steel sheet to trans-formers and reactors and details the associated benefits.

The CVD (chemical vapor deposition) siliconizing pro-cess is the most effective for manufacturing 6.5% silicon steel sheet. The reaction involving SiC14 gas and the source material is:

Fig. 1 shows an outline of the siliconizing process. Silicon diffuses into the steel sheet from the surface F%layer until the distribution of silicon throughout the thick-ness of the sheet is uniform. Previous experiments revealed that the time required for siliconizing was in the order of minutes to hours [5]. Commercialization of the technique therefore required a reduction in processing time.

Improvement of the reaction speed and efficiency was brought about by an increased flow rate, which increases the supply of SiCl 4, and also by the rapid removal of FeC1 e, the by-product of the reaction.

The saturation phenomenon is considered to be due to the fact that the rate determining factor for the siliconizing process changes from the surface reaction on the steel to diffusion into the steel.

The large difference in the diffusion rates of Fe and Si results in the ready formation of Kirkendall voids, with consequent negative effects on the magnetic properties. Suppressing the formation of these voids involves removal of the oxide film from the sample during pre-processing and adjustment of the supply gas volume to suppress Fe3Si growth. Fig. 3 shows the dependence of void formation on permeability.

The configuration of the line is shown in Fig. 4. The line consists of heating, CVD (siliconizing), diffusion, cooling, and coating zones. Cold-rolled, continuous, 3% silicon steel sheet, 600 mm wide and 0.05 0.3 mm thick, is used to produce coils of high-silicon content silicon steel sheet with an insulation coating.